A Cancer Diagnosis and a Move to Reno

Michael Millman was all set to move to Reno from the Bay Area when he noticed a pimple-like growth on his forehead, and he decided to get biopsied "just in case." It was July 2020, less than six months into the COVID-19 pandemic, when Michael got the call that the biopsy came back cancerous. He was in shock. Still living in the Bay Area at the time, he immediately scheduled to have the basal cell carcinoma removed in August.

After the removal, he thought he was in the clear, but a few months later, Michael noticed that his lymph nodes felt weird, and he even cut himself shaving because of some persistent swelling in the area. Given his recent history of skin cancer, Michael immediately scheduled an appointment with a specialist in the Bay Area.

"I met with an ear, nose and throat doctor who suggested a fine needle biopsy of my lymph nodes, tongue and an MRI, both with and without contrast," Michael said. "I remember feeling dreadful and that I couldn't believe this was happening yet again."

Michael's squamous cell carcinoma, determined by the pathology report to be significantly influenced by the HPV virus, had metastasized to his lymph nodes on both sides of his neck, and his doctor said it could be stage four cancer. He remembers feeling like he was in quicksand, unsure if he should follow through with his move to Reno, or stay in the Bay Area for treatment.

By now, it was early December 2020, and hospitals in the Bay Area and across the world were at limited capacity due to COVID-19. But, in what Michael describes as a positive twist of fate, the San Francisco ear, nose and throat provider he had seen about his biopsy results mentioned that he knew many providers in the oncology department at Renown, including Abhinand Peddada, MD.

The San Francisco provider called Dr. Peddada's office with a referral, and Michael even remembers that Renown called him to hear more about his diagnosis before he even got the chance to call them "To be honest, I was feeling shut out in the Bay Area, and Dr. Peddada said he could help me expedite the treatment process," Michael said. "I finally felt a sense of relief."

This vaccination provides effective and long-lasting protection from the HPV strains that can cause these cancers. 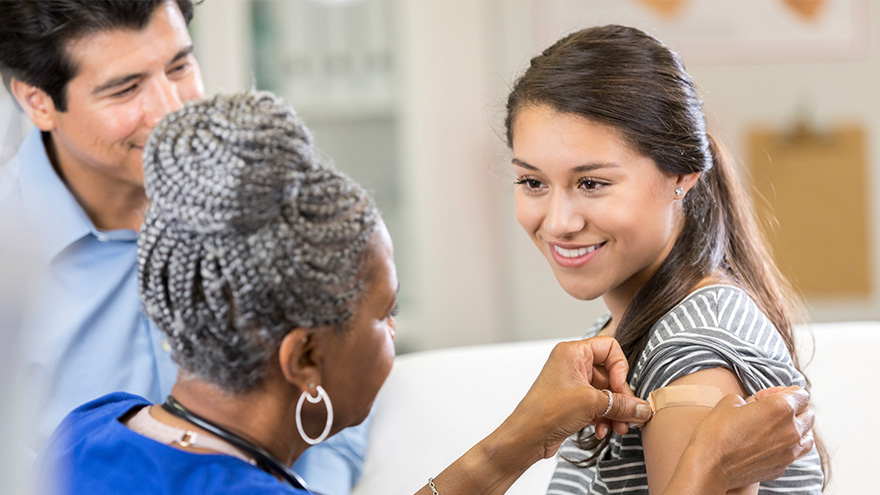 The Transition to Renown

The oncology team at Renown got Michael in immediately for a positron emission tomography (PET) scan, which is an imaging test that uses a special dye that acts as a tracer throughout the body to indicate disease.

"It was remarkable how smooth everything went, I felt like I was back in my original home in Illinois, but with the highest quality of modern care and equipment," Michael said. From here, Dr. Peddada recommended Michael participate in a seven-week double-blind clinical trial. "I felt so much more empowered after my conversation with Dr. Peddada, I can't even put it into words. He thoroughly explained what was going on, and I completely turned my trust over to him," Michael said.

On Dec. 28, just six months after he noticed something was wrong and amidst a global pandemic, Michael started the clinical trial and cancer treatment program, which he described as one of the most unique programs Renown offers.

A new routine for Michael had begun – Wednesdays were chemo days, along with regular check-in visits with the oncology team. As was expected, Michael started feeling physical changes and the loss of various sensations. He started working with a multitude of departments within Renown, including speech therapists and nutritionists.

Everything was going according to plan until week six. Just one week out from completing the full 7-week clinical trial and chemoradiation treatment program, Michael was feeling so sick that his significant other Susan insisted on taking him to the emergency room. He was immediately admitted to oncology, where the nurses suggested he needed a feeding tube.

Michael thought about it but ultimately decided he didn't want to be put on a feeding tube and would instead prove the feeding tube was unnecessary by taking proctored regular swallow tests administered by a panel of specialized nurses so he wouldn't give himself pneumonia.

Severe swelling of the throat was a symptom of the clinical trial, and while frightening and uncomfortable, it let Michael know that he had likely received the clinical trial's experimental drug and not a placebo.

A Positive Diagnosis and a New Outlook on Life

Three months after Michael's final day of treatment, he went in for a follow-up PET scan, and there was no evidence of cancer. "Everything worked the way we hoped it would," Michael said.

As is to be expected, Michael still experiences some issues related to his cancer treatments, but he is comfortably settled into a life now in both Stateline and Reno. He has materially reduced his alcohol consumption, eats healthier, focuses on hydration and stays physically active, including working as a ski instructor at Mt. Rose in the winter.

"I am proud to live in a vibrant community with such an incredible healthcare system that I can trust," Michael said. "Renown feels local and friendly but at the same time so incredibly competent and modern."