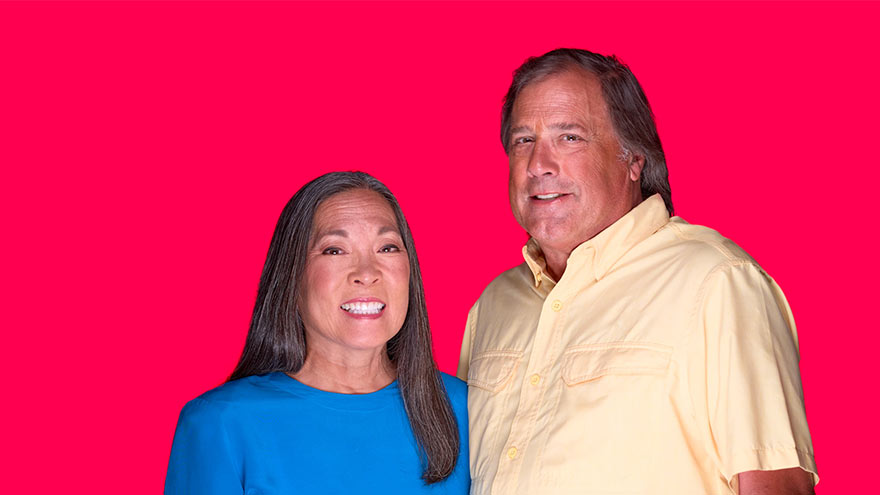 Renown’s Sterling Silver Club is honored to feature members of our club each season. We thank Mary and Dave for sharing their fun-loving story and all of our members for leading healthy, happy lives that inspire us all.

Rhyolite almost sounds like a rock band, but it’s not (at least not one that we are aware of). It is a ghost town near the eastern boundary of Death Valley National Park, the most silica-rich of volcanic rock – and the magma-based spark for what has become a very special relationship of our featured Sterling Silver Club member couple, Mary and Dave.

“May I carry those for you?”

Mary and Dave first met back in January of 2015 when they sat near each other at a financial seminar in Reno. Though friendly banter was exchanged at the time, contact information was not. It wasn’t until later that year in July when “rock karma” intervened. The two reunited unexpectedly when they joined friends on an excursion to Wonder Mountain near Fallon, Nevada to gather… Rhyolite!

“I remember I enjoyed meeting Mary at the seminar and thought she was pretty, but didn’t get her phone number,” recalls Dave.

“But that day in the desert, Dave asked if he could carry my rocks,” Mary smiles, “and we got each other’s numbers and began dating after that.”

Since then, they’ve gone “rockhounding” all over the state. Smokey quartz brought them to Mt. Peterson, north of Reno. Daisy agates were worth a trip to Austin, Nevada. They’ve hunted for Larsonite, a rare, petrified bog wood found only in McDermott, and also venture out with the Comstock Gold Prospectors Club in search of that precious metal.

Hiking, exploring and searching for interesting and colorful “finds” together make rock hunting one of the couple’s favorite hobbies.

“I’m especially fascinated with petrified wood that’s been lying in the desert for millions of years until I dig it up,” says Dave. “Pretty cool!”

Mary and her four siblings are first generation Chinese Americans. Her parents who emigrated from Malaysia to the U.S. by way of Canada after World War II and raised the family in Northern Virginia. After earning a bachelor’s degree from the College of William and Mary, our Mary started a career in software training and project management. Now retired, she occasionally goes to work helping friends and family with travel reservations.

Dave and his three siblings were born and raised in Southern California. He remembers his parents taking the family camping in the Sierra Nevada mountains a couple times a year and trips out to the sand dunes in San Filipe, Mexico where they’d stay for weeks at a time. Dave began his career in the restaurant industry right out of high school and was eventually recruited to run a developer’s hotel restaurant and be his personal chef. Dave wrapped up his career in 2012 when he stepped down as executive chef at Circus Circus Reno Hotel & Casino.

More recently on the non-work front, Dave’s son, Cameron, and his wife, Rebecca, have blessed grandpa Dave with a granddaughter, Madison – and there’s a grandson on the way!

Getting to Know You

Mary and Dave also use their time to collect travel experiences that have allowed their relationship to deepen and their appreciation of each other to grow. They’ve camped at Death Valley and locations throughout the Nevada desert and admit to more civilized stays in hotels and resorts in Ireland, Mexico, Portugal, Spain and the United States. They also spend a week every fall paddling their canoe along the shores of Lake Tahoe, which they call the most beautiful place in the world.

Well, when you travel that much with someone, you really get to know them.

“Mary has the clever wit to keep things interesting,” says Dave. “Plus she has the patience to put up with my little quirks and idiosyncrasies, and the gumption to keep me out of trouble!”

And Dave’s cooking skills have found a fan in Mary, who’s a bit of a cook herself. “My favorite dish of his is roast duck,” says Mary. “I offered a little coaching and showed him the traditional way of serving it with steamed rice pancakes, hoisin sauce and spring onions.”

Mary and Dave enjoy socializing with other Sterling Silver Club members and learning how to better care for their health at different club events. As for their advice to other members? That’s simple: “Live the best life you can by taking care of yourself and your family and friends.”

The Sterling Silver Club thanks Mary and Dave for giving us a glimpse inside their ROCKIN’ relationship and appreciates all of our members for being passionate about living their best lives.