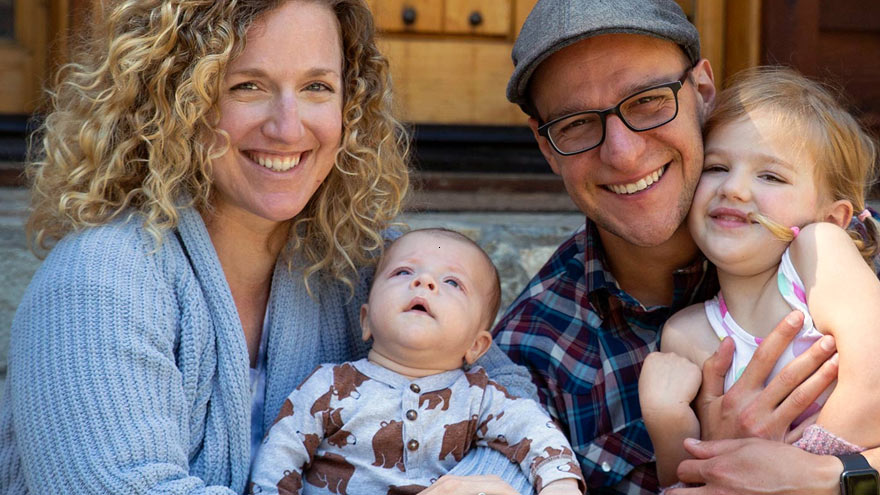 A clubfoot is where the foot is turned in on itself and points toward the ground. A clubfoot diagnosis during pregnancy is surprising and challenging during any circumstance. And in the case of parents anticipating surgery during a pandemic, options can be scarce. These parents took a deep breath, and with the help of Michael J. Elliott, MD, pediatric surgeon with Renown Children’s Hospital, their baby is on the road to recovery.

Ryan Kasprzak and Lindsay Levine traveled from New York to San Francisco, with their young daughter Sally, for an adventure. Ryan was the dance director for the tour of the musical “Hamilton” playing at the Orpheum Theater there. While living in San Francisco, Lindsay found out she was pregnant. However, the couple was were surprised to find out their baby, Wyman, had a clubfoot at the 20 week sonogram. They went into action lining up an orthopedic specialist for their baby.

“After Wyman was born we were proceeding with what we thought the original plan was and we called the orthopedic that we had set up in San Francisco and due to COVID-19 they were not taking patients,” recalls Lindsay.

A Change in Plans

With no doctor to care for their newborn son, things were up in the air. Fortunately Ryan’s aunt did some internet research for doctors in Reno. “She found Dr. Elliot and he had great reviews and good feedback …and so we gave him a call and he said he would treat him and see him as soon as possible,” Lindsay remarks.

“Most people in the country start this casting within one to two weeks,” says Dr. Elliott. He thinks the best opportunity for a clubfoot correction is when they are first born and flexible.

The parents gratefully give Dr. Elliott credit for his own flexibility about their unique situation.

Lindsay explains, “We are from New York. We were living in San Francisco. We're staying in Tahoe and seeing a doctor in Reno.” She compliments Dr. Elliott’s good bedside manner and listening skills with putting them at ease and reassuring them. “He met Wyman and he said, ‘I can do this.’ ”

Ryan adds “When we went in we had that initial appointment and he put that first cast on Wyman. It was like, 'Okay - he has a cast it's gonna be okay. Yeah, we’ve started.”

Moving Forward with a Clubfoot

Dr. Elliott has a positive outlook about their son’s future. “Baby Wyman is gonna do great. We have a really great correction on his foot now. He went through about four or five casts. He's in those casts for three weeks and that's why they decided to go home.”  Looking ahead Dr. Elliott predicts Wyman will be in braces full-time (12 to 14 hours a day), for two years.

“I think the most important thing for them to know is that this kid is going to develop normally and be able to do all regular activities without limitations,” he adds.

“Obviously we wish we could stay with Dr. Elliot and he could see it through for all the years, but we don't live here," Lindsay expresses. She and Ryan plan on finding another doctor back home in New York to collaborate the next steps of care with Dr. Elliot.

About 1 in 1,000 babies in the U.S. has clubfoot making it a common birth defect, according to the March of Dimes. Although there is no known cause for clubfoot, surprisingly it is more common in boys than girls.

During the COVID-19 pandemic Dr. Elliott continues to evaluate and treat conditions including scoliosis, growth plate injuries, broken bones, clubfoot and others. Additional health and safety precautions are in place at every Renown location including health screenings and face masks.