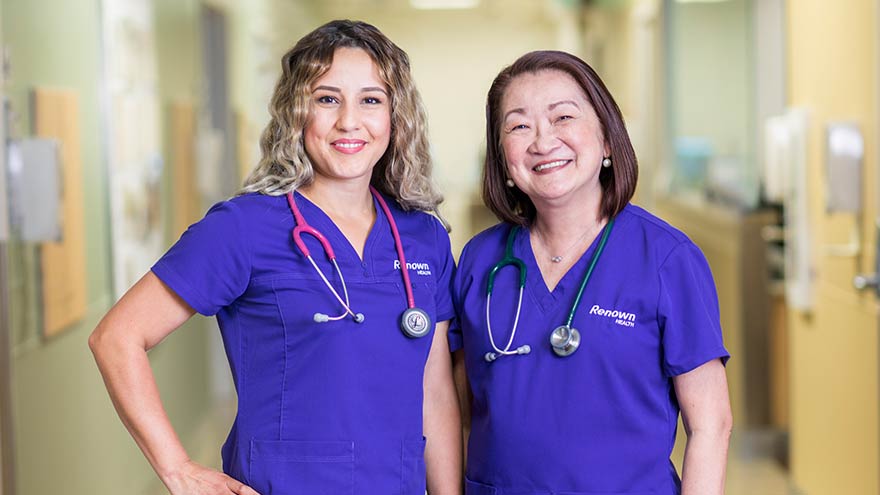 Thanks in part to the care provided by Renown’s award-winning team of ICU nurses, Tony Mowatt is alive, thriving and engaged. Read his story — and learn about the exclusive Beacon Award of Excellence — below.

The growl of the engine.

The feeling of freedom.

That’s what Oakland resident Tony Mowatt was enjoying as he drove up Highway 88 toward Reno for the semi-annual Street Vibrations event.

But he wasn’t expecting to hit the diesel truck — or to fly off of his bike over 100 yards, skidding onto the side of the road. He was severely injured and in the midst of rural Nevada.

He had crashed just outside Centerville, Nev., and was miles away from any critical care hospital. Having the only trauma center equipped to treat his serious injuries, Tony was flown to Renown Regional Medical Center and admitted to the intensive care unit (ICU).

Tony’s girlfriend, Tasha Klubock, was notified by his friend that he had been taken to the hospital. She immediately drove from Oakland to Reno to see Tony at Renown. Her first night there was overwhelming and scary — nobody knew if Tony was going to survive.

But the nurses helped Tasha cope with the initial shock. Caring for the patient isn’t their only job — they also care for the family.

“They [the nurses] just kept coming in and checking on me,” she said. “Angela was so amazing that first night. I really just bonded to her, and I remember when the shift switched, I panicked thinking about who was coming on and wanting to meet the next nurse … But they all came to talk to me — I had updates from everybody. It was just amazing.”

Tony spent 32 days in Renown’s Sierra ICU, surviving a serious head injury, all with Tasha by his side.

He and Tasha still stay in touch with Renown nurses.

“Even though this was literally one of the most hideous, craziest things to go through,” Tasha said. “There was so much hope and they became such a family to me and I still think of that time fondly because of the nurses.”

“I’m alive because they wanted me to be,” Tony said.

And Tony and Tasha are now happily engaged and planning their wedding.

Renown’s ICU nurses provide care like this every day to countless patients — it’s so second nature to them that they forget how exceptional it truly is. But it’s certainly care like Tony’s that has earned them national recognition.

The American Association of Critical Care Nurses awarded the Beacon Award of Excellence to the Sierra, Cardiac and Roseview ICUs. These are the only ICUs in Nevada to obtain this honor.

“I couldn’t have been more proud of what we’ve done to accomplish this,” said Nick Dovedot, Cardiac ICU nurse. “It represents who we are. Just a great group of individuals who all work together as a team to make our patients get better.”