How to Spot Depression in Men 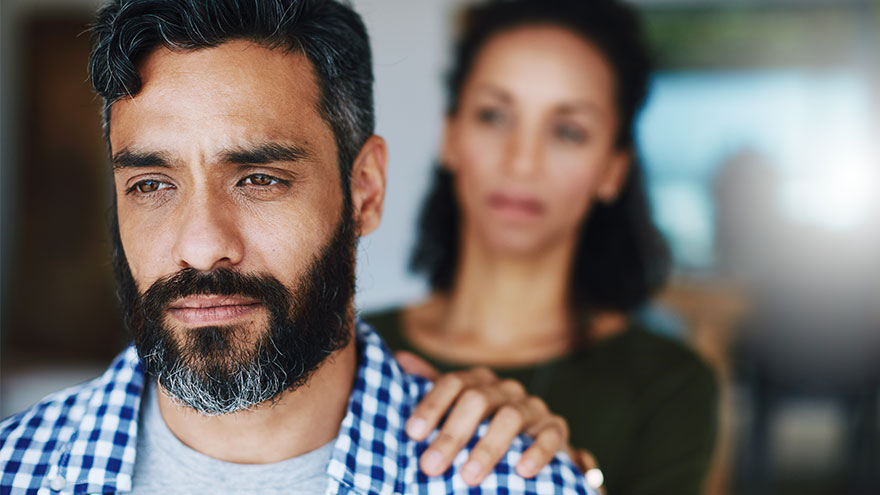 Has a male in your life been affected by depression? It could be your father, husband, or son. Or maybe your brother, a friend – or even, your co-worker. They all have one thing in common, they’re men and they may not always be able recognize when they need help. Here’s how you can support the men in your life by understanding their unique signs of depression. Dr. Coard, Ed.D., Psychologist with Renown Behavioral Health, weighs in on the topic of depression and the warning signs.

More than 6 million men are diagnosed with depression each year, and surprisingly, depression in men can differ from women. The signs of depression are not easily recognized and it’s common for men to be in denial about what they’re going through. They can demonstrate anger and aggression instead of sadness – making it difficult for loved ones, or even their providers, to recognize.


Behavioral Signs of Depression in Men

High levels of the hormone cortisol are released during stressful situations affecting the neurotransmitter, serotonin (a feel good hormone), contributing to depression. You can identify depression or suicidal tendencies by paying close attention to the following behavioral changes:

Factors That Lead to Depression in Men

Work stress or long-term unemployment can be huge contributing factors relating to depression. This type of life event can be overwhelming, making it impossible for a man to cope.

The loss of a relationship can be a significant contributing factor to the emergence of depressive symptoms and past experienced physical, sexual, or emotionally abusive relationships. With this in mind, counseling can often help individual to overcome this type of trauma.

Overwhelming sadness due to the loss of a loved one can trigger depression. Although normal, each person goes through their own grieving period. For example, normal responses to death are insomnia, poor appetite and loss of interest in activities. Pay attention if grief seems prolonged or out of the ordinary.

In particular, depression coexists with medical conditions. As men age, this can be passed off as normal aging, but it could be more serious. In addition, illnesses such as thyroid disorders, Addison’s disease and liver disease can cause depressive symptoms. Diabetes, cancer, heart disease, or Parkinson’s disease can affect any age, thus triggering or worsening depression. Some older men also feel like they may be suffering from dementia because of difficulties with memory this may be a symptom of depression. A trip to the doctor may be in order to help alleviate concern and worry.

Depression in Men and Suicide

Frequently the emotional pain occurring with depression can distort a man’s ability to see a solution beyond suicide. Individuals with depression become very rigid and constricted in the way they solve problems. The statistics below speak for themselves, helping us understand the need to reach out to those who need our support.

How You Can Help

Now that you can identify some of the warning signs of depression, here’s how you can help: