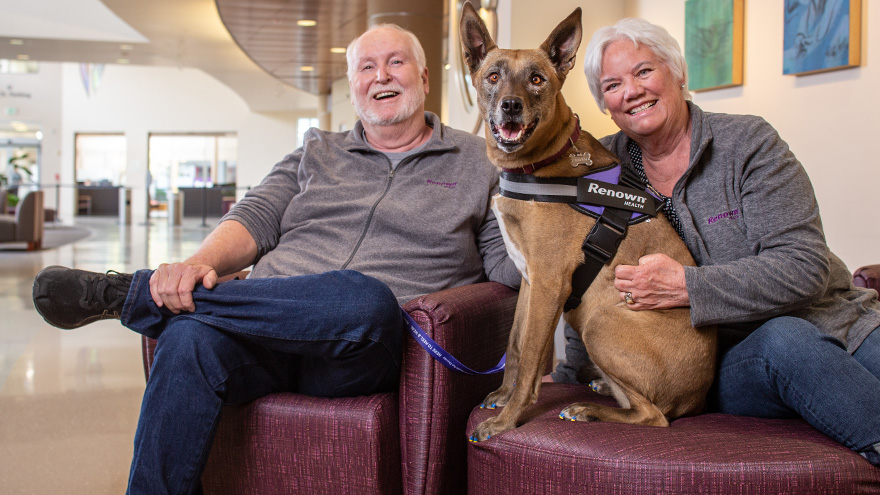 If you’ve ever spent time at Renown, you may have noticed there are some four-legged volunteers roaming the halls greeting patients, visitors, and staff. Since 1997, Renown has been fortunate enough to have its very own therapy dog program. As of today, there are 43 dogs in the program, and each of them have gone through countless hours of training to offer healing, comfort and support to those seeking treatment within our health system. Each of these therapy dogs have their own special personalities, but they all share the same mission: to make a paws-itive impact on everyone they meet.  One therapy dog that has touched many lives at Renown is Raven, a five-year old Belgian Malinois mix.

In March of 2019, Reno residents Richard and Vickie Lange rescued Raven from an animal shelter in Portola, California. When the Langes made Raven part of their family, they immediately started her in obedience training. After seeing her do so well, they thought of an idea that would not only help Raven reach her full potential but also allow them to give back to others – they decided to train Raven to be a therapy dog.

Renown has several volunteer opportunities, including pet therapy. We'd love to have you join our team! 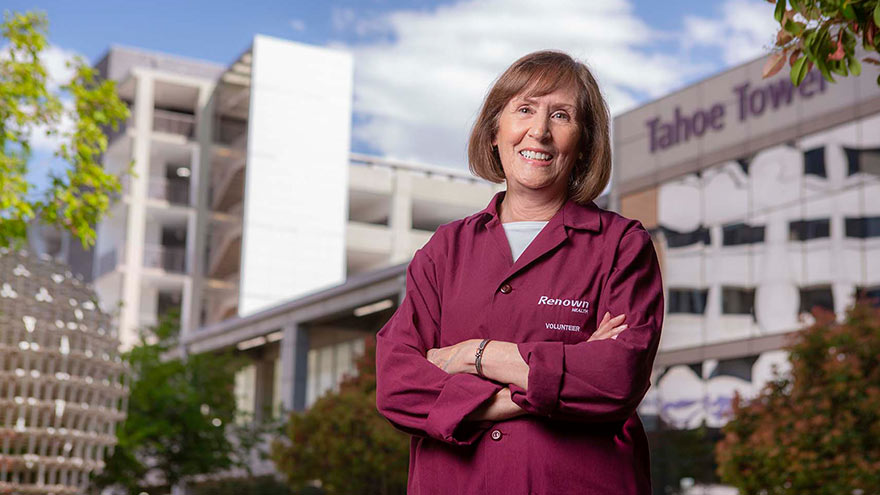 Richard and Vickie said it took about a year of training to get Raven certified, and she has continued to go through various training sessions and refresher courses. They started volunteering with Raven at Renown a couple of years ago and have since been making their rounds every Thursday, visiting Renown Regional Medical Center and several other locations as well. According to Richard and Vickie, Raven is a dog after all and loves to run around and play – but as soon as they put on her vest and volunteer badge, she becomes calm and composed, ready to do her job. Raven kindly greets each person she meets and sits quietly by their side while they pet her. “It’s incredible to see how someone’s mood or day can be turned around after spending a little time with Raven,” said Richard and Vickie. “Their faces just light up.” Richard and Vickie hand out little cards to those they meet, with an adorable photo of Raven’s smiling face on the front and some fun facts about her on the back. Sometimes they have Raven do a couple of fun tricks to spark a few laughs and smiles.

There have also been some instances where Raven has not only enlightened someone’s mood but has helped them medically as well. Recently, Raven visited a young boy who had been admitted to Renown Children’s Hospital. He had a high heart rate that his care team was struggling to bring down. Upon request, Richard and Vickie brought Raven to his room to sit next to him for a little while. Within minutes of spending some time with Raven, his heart rate came down.

Raven is a true star at Renown, with many that know and adore her from employees, patients, and their families and friends. “We find ourselves encountering many dog lovers and owners who get so excited to visit with Raven, especially when they’re having a rough day,” said Richard and Vickie. “We love spending our time at Renown and making a difference.”