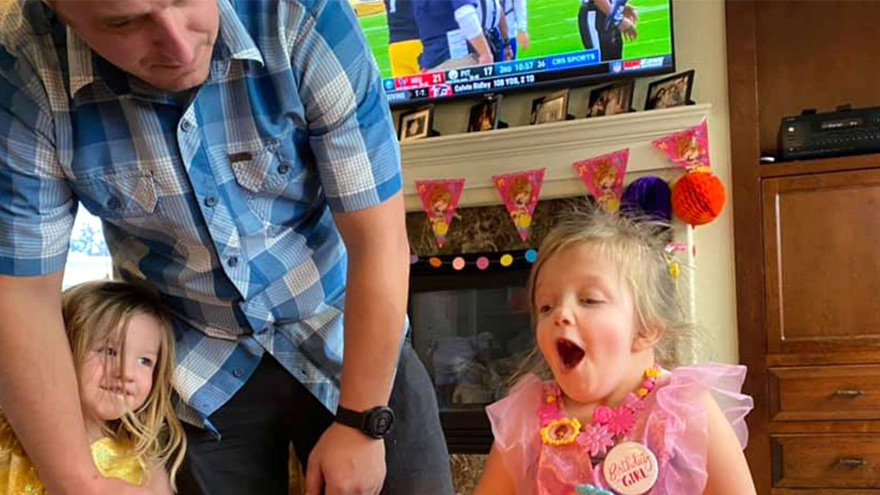 For Michael J. Elliott, MD, a pediatric orthopedic surgeon specializing in scoliosis, it’s just another day helping patients. But to local five-year-old Makenna Christensen, her substantial spine correction is life-changing. Though her journey to body confidence was months in the making, her smiles are a reminder that a thorough, thoughtful treatment plan can yield amazing results.

Words don’t adequately describe the feelings you have when you unexpectedly learn your child has a birth defect. For Nicole and Nick Christensen it was a shocking surprise. During Nicole’s sonogram appointment something unusual was seen. After an amniocentesis, their baby girl was diagnosed with Noonan syndrome, which can affect a child’s height and bones.

To prepare, the couple read all they could on the subject. Fortunately their daughter Makenna, was born full term and healthy. Shortly after birth, Makenna had some feeding issues and returned to the hospital. Although they resolved and she had no major complications, both parents felt unsure about their newborn’s future.

With the help of Nevada Early Intervention Services , Makenna’s development was monitored until she was three years old. “Her posture has been an issue her whole life,” says Nicole. Nick also noticed when Makenna started walking her range of motion was poor. It was especially noticeable when she got dressed and raised her arms to put on clothing.

Nicole observed Makenna was falling a lot in preschool. She asked Makenna’s pediatrician about physical therapy to support her coordination and muscle tone. Although physical therapy was helping Makenna, her therapist suggested Nicole seek the opinion of Dr. Michael Elliott, a pediatric specialist in orthopedics at Renown Children’s Hospital.

Dr. Elliott diagnosed Makenna with scoliosis, an abnormal curvature of the spine. While this condition is most common during a teenage growth spurt, it can also happen in early childhood. Affecting about four million people in the United States, it is estimated 20 percent of all spinal deformities in the U.S. are people living with scoliosis.

Makenna’s spinal curve was significant – over 30 degrees. Through years of experience Dr. Elliott opted to put Makenna in a spinal cast, instead of multiple surgeries. “My approach is to postpone surgery as long as possible - it is tough for the patient and families,” he says. “Often excellent results can be achieved through non-invasive treatments such as, casting and bracing.”

Nicole appreciated Dr. Elliott’s reassurance through the treatment plan. “It was obvious through the X-rays that there was a significant issue,” she shares. “He guided us through the timing and process and how correcting it sooner would help keep her future growth on track.”

For seven months Makenna wore a cast that looked like a tank top, bracing her spine while allowing movement. Now she wears a hard plastic brace, specially fitted to her body.  “Kids tolerate casting well,” explains Dr. Elliott.  “It is a 45-minute procedure. The patient sleeps while their spine is put into traction as the cast dries.” She will continue to wear larger braces as she grows, eventually only wearing them at night.

A Straight Path into the Future

Dr. Elliott admits, “Not every cast is a cure. Two thirds of a child’s spinal growth happens by the age of five. Getting past the five-year mark means fewer surgeries. It’s wonderful to see Makenna’s body image improved.”

Nicole agrees, “The way Makenna holds herself is completely different. She’s more confident on her feet and more balanced.” She can now play with her sister Aria, 4, and brother Lexi, 8 months, without the fear of falling. Nick is in awe of the improvements she has made, “Seeing her thrive more has been wonderful.”

The Christensen’s are hopeful about the future. “Makenna is doing really good. She’s wearing her hard brace full time and her growth is consistent,” expresses Nicole. “She’s even starting swim lessons this week.”

With mask wearing at every doctor visit during the COVID-19 pandemic, Makenna and Dr. Elliott look forward to seeing each other’s smiles in the future. Makenna’s story highlights the over 18 different specialty options for children locally at Renown Children’s Hospital.